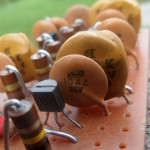 Collection of few Big Muff variants. There’s no such thing as standard BMP schematic – To many variations was issued, and even the same model from the same year of production could sound different, since EHX didn’t care much about part selection.

Since I’m a BMP freak myself, you can expect many variants here on my website now and in future! All layouts are presented with full off-board wiring.

Current stripboard layouts are different than what it was here before. If you was working on one of previous versions email me, and I’ll send you old files. New layouts are way better routed and are cooler in general. Firstly – old layouts was done for odd parts I had on hand, some very unusual and hard to source. Current layout was designed to fix that, plus I had few more goals in mind:

– typical part raster, 5mm for most caps – ceramics, or film (easily takes Panasonic SMF’s), 2,5mm for clipping/blocking caps
– all resistors 1/4w and flat on board
– no jumpers (I’ve failed here, but still less than before)
– small enough to go with Hammond B
– it’s for .1″ pitch stripboard

One extra part unseen on schematic is 2M2 anti-pop resistor on input. Unusual 4nF ceramic cap in tonestack you can substitute with any closes value, like 3n9

All layouts bellow based on Kit Rae schematics

And now – different layout for kind-off the same crap. The problem with layout above is lack of space to accommodate can type, radial e-caps. So I’ve started from scratch. Electrolytic caps needs more space, and here you have it. Also drawing this I was thinking about it as a universal layout for future triangle variants – most of those Triangles contains e-caps in different, not always the same spots. That’s why you see 2,5mm raster for non-polar capacitors – as it’s the same raster as most of electrolytic radial capacitors I have . My advice is to use WIMA MKS02 series caps for 100nF. Even 100nF-150nF/63V are 2,5mm. 10nF is 5mm in my layout – use MKS2 here, or anything 5mm, choice is wide, it’s common raster part.

Like I said, layout is different to the ones I’ve posted earlier, it’s bigger… but still fits small Hammond “B”, it’s not as nice as the ones posted before, has many trace-cuts, and jumpers (whom I hate), but this is the best I can do dude!

Just one layout for now, I’ll try to update (and finally finish it up ASAP)

J Mascis Red&Black – yeah I know, it’s not Triangle, but many will like it 🙂

And now, different flavor of the same good old crap

BMP with AMZ presence control. The base is the same overall layout as in J Mascis Red&Black, but only with component names (place your own favorite flavor) for everything other than tonestack.

For tonestack my choose was standard AMZ 1th version values. It’s open ended project, do your own Big Muff mix.

For more information about AMZ tonestack fallow this link

And now something I don’t do really. I’m more into vero and turretboard stuff. But I do PCB’s occasionally. My PCB pattern is designed for look and mojo, not the size. No matter what chicks says, size matters, bigger is better, at least for me (pedal-wise). Real man should have huge piece of equipment, that’s why we like big cars, half pounder Big Mac, and boooooooobs. For fuck sake, wipe your nose and be a man!!! Plus, this is BIG Muff, right? In short, it won’t fit in your B-sized enclosure (EDIT: well, now it will after endless revisions). DEM size E is what it needs really, as used by D*A*M or Cornish. After all I’ve made it for my own use… So, if you like to have nice discharge when changing battery, this may be for you.

Actually – this project was born months ago, and came through several changes and revisions. I wanted to make it perfect. It’s way smaller than first attempt, but still ballsy. Now you can put it also into Hammond 1590 J, or even better – into one of these cute pedalenclosures.com YY boxes, or common – boring as fuck Hammond “BB”.

Extra pads near capacitors are for larger components like axial BC electronic 1uF’s (I think 40v-63v I have, those lay down nicely), and the rest of the components I had in mind was bigass ceramics, tropical fish caps (or similar raster), and half watter resistors.

PAGE REVISION – All projects removed! Instead now you can download just one zipped file with universal project. Blank schematic with component numbers/names, matched component layout and PCB transfer files are there. Also DIYLC v3 project files are included, so all you have to do is open them up, place your own component values from schematic you have/like, print it up after you done and you’re ready to go.

Great schematic source is Kit Rae Big Muff Page and to be honest the basic schemo I provide match component names of Kit’s schematics. If you will have any problems, concerns, questions – I’m always happy to assist, just trow me an email [go to Info & Contact page]

what else… ah, yeah!

Schematic and component layout shows electrolytic caps in most of the places, BMP schemos are different, sometimes there is no e-caps at all, so just use what the schematic is asking for.

Also different schematic asks for different electrolytic cap orientation. There is not much difference what orientation you’ll use. Electrolytic caps block only DC current, and your signal is AC. Since in BMP 1uF polarized capacitors are in signal patch you should have no problems either way, but it’s recommended to use orientation as per my schematic. Here’s the quote by Deltafred from FreeStompboxes explaining possible issues:

Polarised electrolytic capacitors work best if the the +ve side has a higher voltage on it than the -ve side.

They will tolerate a small reverse polarity (about 10% rated value IIRC – could be wrong). If you reverse bias them too much they start to act as resistors and conduct, very noisy resistors I seem to remember.

The trick is to asses (or measure) which side has the highest voltage on it and make that the +ve side. If one side goes to ground via a resistor or pot then that will (usually) be at 0v as far as DC is concerned so that side would be -ve.

For more info fallow this link