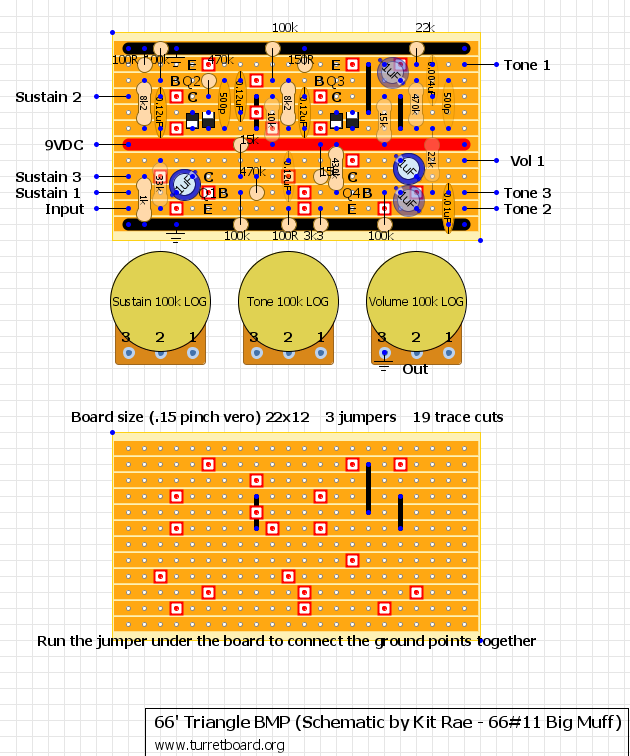 Fuck yeah! Kit Rae’s website is so inspiring 🙂 I couldn’t resist to draw the Triangle tonite. Kit says that the unit he took the schemo from is his main BMP currently. I’m sure it rocks, I need to give it a try soon… 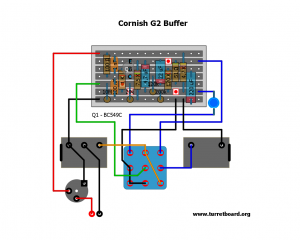 At one point I’ll draw tag, and vero layout’s for complete unit, but for now – just a input buffer. I may use it with my Ramshead soon

Get the .pdf file here

So… I have a lot of nice bigass ceramic caps and Ramshead build in mind, also 4pcs of 2N5133 new old stock with gain above 500hfe is here waiting. I did this layout with my parts selection in mind. I could track the grounding better but I decide to live it like that as the part layout is what I’m fancy with. I’ll run the jumper to connect the grounding points together.

I was drawing this from the layout found on Kit Rae’s website (awesome BMP info source). This layout is not verified for now.

Edited 10.04.2011: Old file deleted, new layout added. This is basically exact the same thing than before, but with better component routing. Input is closer to ground so using shielded wire is easier now. I like this layout way better now, I hope you feel the same 🙂 Also this one is smaller, even more than my Triangle Muff. Could be even more compact, but I still want to use my ceramic caps. 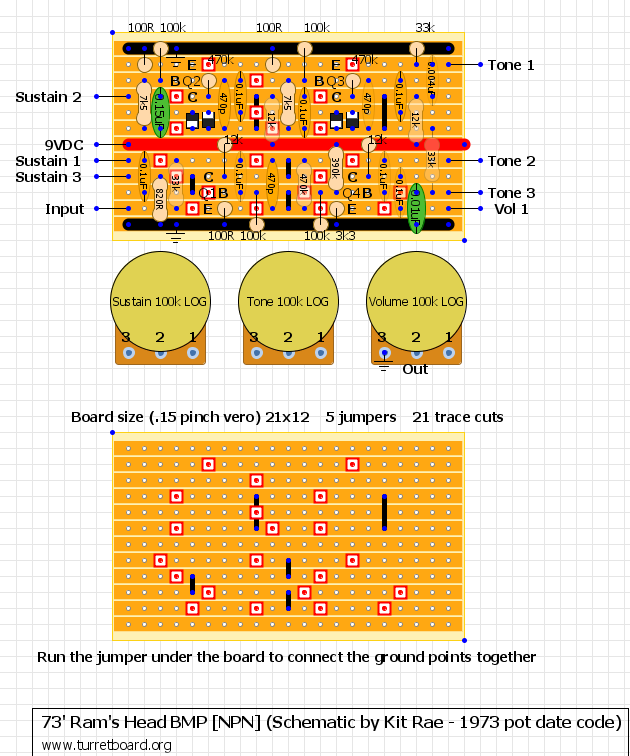 Edited 12.04.2011: I’ve spend some time today to make my Muff’s smarter. I’ve end up reducing two grounding points to only one, and make it even more compact (21×11 – I’ve never seen stripboard BMP that tinny)! Also LED limiting resistor is added to the layout. I think this is the final version 😉

One of the newest D*A*M custom project creation. As far as I know only 10 was made, and no more will ever be. This project is based on Zonk Machine / MK1 Bender with little ad-ons that I really like here. Firstly, mostly notable is that filter/tone control was added – it’s my favorite tone mod I did in lot of my builds firstly seen in Joe Gagan’s Easy Face. To the standard 1000pF cap another bigger one (.1uF) is mixed in. Simple, but lovely solution! Tone pot value is just guess but I’m pretty sure it’s fine. Other than that standard PNP germaniums, modern addition of statut LED, and some components are shifted here and there. Cool unit!