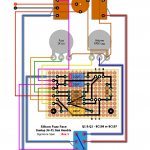 Here’s the lil layout I did (PDF). I was inspired by Electric Warrior’s perfboard Fuzz Face layout, he done years ago.

I just simply added few components as per JH-F1 spec.

Still a lot of vintage charm and vibe.

Q2 collector bias in this model is set quite high, way higher than standard 4.5v.

I’m not sure about Q1 collector bias, it seems to be around 1.4v, so not far away from typical FF Q1 bias point.

47pF capacitor isn’t confirmed. In JF-F1 it’s unmarked SMD type, should be between 47pF and 150pF.