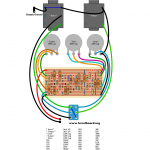 Aria… Blast from the past. My first playable guitar was Aria brand back in early 90’s. The blue pearl Ibanez RG series ripoff.

This old school fuzz unit is kind of ripoff too. Closely based on EHX Big Muff Pi, minus output buffer.

All caps are ceramic in original RE-203, and my layout is designed to easily accommodate 2,5mm 560pF ceramics and 5mm raster caps for anything above.

You may bitching me for stand up resistors again, bud hey! RE-203 have them all that way.

Transistors are at this point unknown to me, I did my layout for common pin-out NPN silicon devices, use your favorite BMP trannies

Get your project file copy here

If You like Meathead tones but You need more knobs – here it is!

Layout of this pedal is very similar to Drag’N’Fly and Super Bee – beacuse all of those pedals are based on fuzz face circuit with changed components values.

Another cool fuzz pedal from D*A*M – Meathead!
This name should tell evrything… Brutal silicon fuzz tones with big muscles. This pedal wasn’t designed to be nice 🙂 but to destroy!

Only one control, but lot of fun! Simple but effective! This pedal really can kick Your amp! You have been warned! So be carefull!

Circuit is based propably on Colorsound Fuzz Box (aka. One Knob Fuzz) with few tweeks to give it more power and midrange. It doesn’t have instant clean up as good germanium fuzz face, but it still response very well for guitar volume knob and picking strength.

I really dig it! It’s quite simple build without expensive mojo components, so it’s great project to start building pedals.

There where many versions of this pedal (Dark, Bass) but usually where changed only input and output caps. Will post more layouts for other versions in following days. Now it latest version called M-13.

Grease Box… Dirt pedal desirable almost by every fuzz freak! 🙂 If You don’t want it You didn’t heard about it before or You already have one 😛

Seriously – very unique sounding fuzz box – D.A. Main wrote that “The Grease Box is a fuzz box that thinks, to some degree, that it’s an overdrive.” and this is perfect description! When we look at schematic – it’s MKIII or MKIV Tone Bender circuit with fixed output cap instead tone control and few component values are changed.

Lot’s of mids, crunch, gain and volume gives You lot of joy during playing. Sounds great on palm muting and power chords, too! It’s doesn’t have low gain Fuzz Face clean up, but it still have very nice dynamics!

In following days will add another layouts for this project!

Hmm… Germanium or Silicon powered fuzz…? That is the question. Hey… why not both at the same time? 🙂 D*A*M answer is Drag’N’Fly!

Hybrid fuzz box based on Fuzz Face circit with increased gain and output, silicon flavour and touch of germanium warm. Temperature fluctuations stable.
Input filter (blend between two capacitors) allows to add exactly as many bottom end as needed. Very interesting concept.
Personally I don’t like input cap blend and prefer solution based on switch between two or three input caps, but many folks likes it – worth trying for sure.

Main change in cicruit – here we’ve got fixed input and output 100nF caps which results deeper tone focused on lower mid range. You can play with those cap to get darker or brighter tones. Also… You can change Level pot value – personally I preffer 100K or 250K over stock 470K which is little to dark for me.

First of all – Really Big Thanks to Sinner for inviting me here on turretboard.org! It’s really a great honor for me.

Additionaly in 2010 version bias trimpot was moved and now it allow to bias Q1 collector and Q2 base at the same time – according to D.A. Main “It does that clean up thing betterer and is more temperature stable“.

OK… at the moment it’s all. Will update this project page soon for sure!

And one more thing… If You ever will have possibility to get D*A*M pedal – I highly recommend those beautiful dirt boxes. Work of David and Linzi are always top notch! 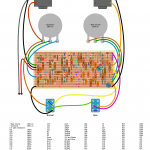 It’s smallest I could go, and at this point unverified.

Only for brave people 😉

YT clips kick-balls so one day I’ll be brave

Get your .pdf copy here

This is what you could get from D*A*M before Mr.Main join the forces with Macaris to create Tone Bender reissue line under Sola Sound brand 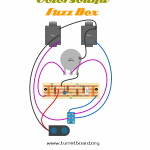 Colorsound Fuzz Box, also known as a One Knob Fuzz

I also should note the ins and outs. Originally you have them swapped around, my layout shows typical In/Out arrangement to prevent confusion