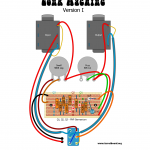 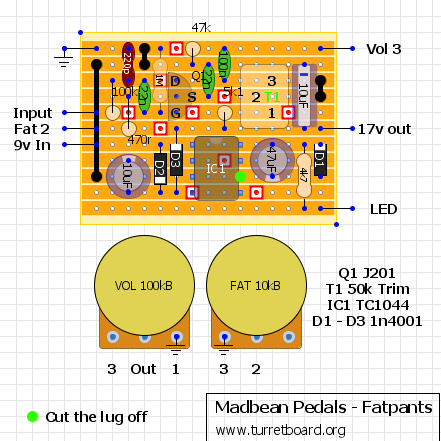 Yet another Ep-3 booster But with added control.

For details go to Brian’s site

I was in need of small vero layout for this one to build into another pedal I’m modifying, so I’ve made it. Layout is sized for Panasonic Stacked Metal Films, as well as 25v Philips axial, Sanyo radial Os-Con’s and 1/2 resistors, as this is the thing I have and like to use.

Thanks Brian for the ideas!

Presented caps are ceramic disc, like in original unit, I have some big ass RMC brand 47n’s ready for this project 🙂

I’m still not sure about the diodes… In most iternal shots I’ve seen there was a huge badass diodes with orange caps, looks very much like my stock of 270’s… Those are germanium not Si like most forumities claims, but in other hand – diode look varies depend of manufacture. I guess experimenting is way to go. Otherwise if you know something I don’t know, email me

Presented layout is for “Burst” version 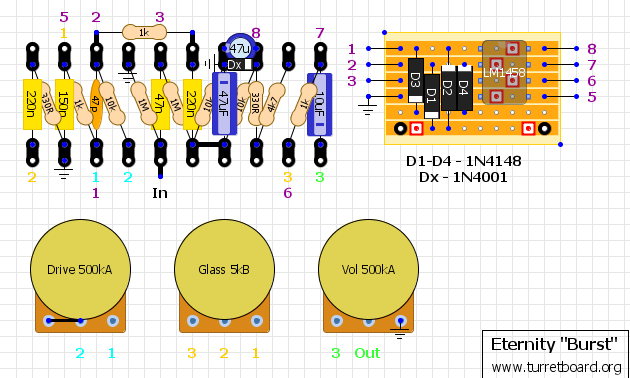 Presented layout is for “V3” 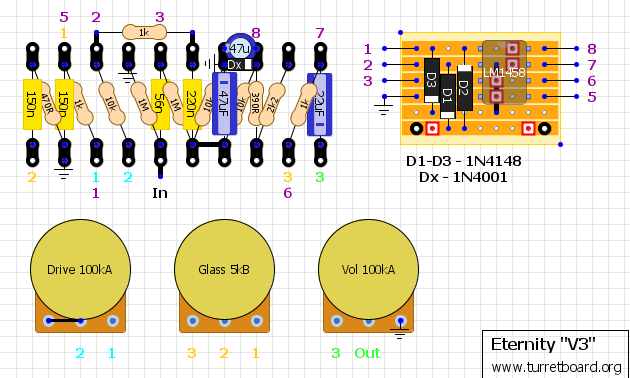 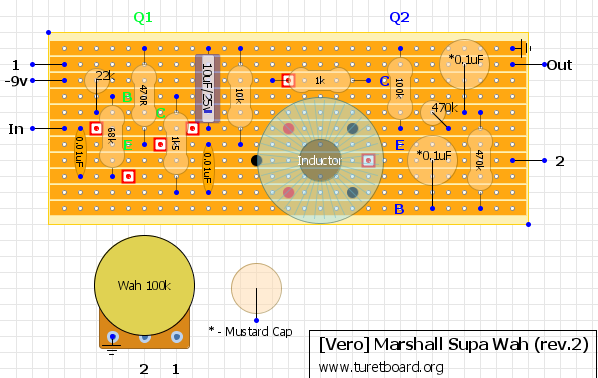 I took a lot of care to match mojo component selection to small vero (IC friendly). Components I had in mind as fallows: – IC friendly vero board – 1/2w Bredley CC’s – axial Philips 10uf 25v (small and sexy) – axial 0.1uF’s are Mustard Cap like in original unit, standing on the layout. Takes less space, and looks Marshall’ish. They did it like that in several units I’ve seen – 0.01uF are Erie ceramics. Distance between legs is around of 7mm. Fit nice into vero Supa Fuzz, as well as in here. You can find them on ebay UK – seller valvesetc – £0.99/one. I’m using that in my builds quite frequently. – Whipple halo replica. I’ll check how Arteffect’s SoD looks on it (if I remember right, SoD is smaller) I took much care to rout out close enough to grounding point to use shielding output wire Surly you can use other component types, like 1/4w resistors, whatever – layout can be even smaller. It was drawn with my favorite part selection in mind, with something I’m using and I have

Odd machine! VOX Grey knock off on germanium transistors. I don’t know much about this one, If you have more info then speak up bro!