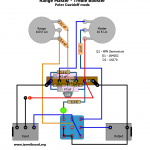 NPN version of legendary Rangemaster Treble Booster. Idea behind it was to keep retro sex appeal, with added “modern” features.

So I’ve added LED, NPN transistor (OC140 or other germaniums, or low gain silicon), diode between emitter and base to help with the stability, and polarity protection. Also the cap blend-in option was added. The idea for it was taken from Peter Davidoff (R.I.P. Sir! We all miss you) also known as SPeter – FSB.org moderator. Here’s a short description from him, from when he still was around with us.

“Two years ago I modded my Rangemaster clone by inserting a pot and a second higher value cap at the input.Instead of panning between the two caps the pot simply adds the higher value cap to the value of the first one thus allowing more mids to pass through the input of the circuit. I got this idea from Joe Gagan`s Easy Face. My values are 100K linear Pot , 0.0056 uf for the first cap and 0.022 uf for the second one! Of course cap values can be different according to the specific needs of the builder!”

Mine cap values are different (4700pF and 47nF). Theoretically it goes from standard treble boost, by the mid boost to the full boost with just a twist of the knob. Similar idea was used with D*A*M Red Rooster

More common PNP germanium also can be used, don’t forget to shift the electrolytic caps around. For proper working ability take the special care to bias it up. On RG.Keen’s geoefx web page you’ll find the article about the RM’s. The thing is noisy, use metal films. Mine was build with sweet looking and high quality black Holco resistors. It’s gone now, and I miss it a lot…