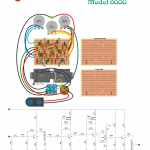 Basically early 70’s BMP clone that has some unusual component values. Few sources on-line reports that this unit sound quite unique to classic Big Muffs. Sound of this unit is often described as  somewhere between a Big Muff and an early ProCo Rat, angry fuzz/OD hybrid, but a lot smoother than older brothers. Originally build into foot controlled wah-wah enclosure where you can set the volume by foot.